Meteorologists are warning the public of a large testosterone cloud that has emerged in a small area of south-eastern Australia in recent weeks. They are unsure of the reasons for the development of the toxic plume but it is assumed to be caused by the cessation of normal activities in the area.

It is not known what health impacts are likely from exposure to the testosterone cloud but medical experts have issued a warning to anyone living in the area who is genetically female and carries the motherhood gene that there could be moderate to severe psychological effects. Such persons are advised to exit the area whenever possible to reduce exposure. Some relief from symptoms is possible through contact with other genetically female persons not affected by the cloud.

Non-residents are being advised to steer clear of the area.

While climate experts cannot yet fully account for the emergence of the cloud, analysis of historical data would suggest that this is not an entirely new phenomenon and there has been evidence of similar developments in the past. In these cases, the cloud has dissipated by early February which would indicate that the reduction in normal activities in the area is the probable cause of the toxic cloud.

Based on such evidence and despite the unusual size of the current development, it is hoped that this testosterone cloud will dissipate by mid-February. The Bureau of Meteorology advises that the cloud should hold no immediate danger to the wider community but that those living in the area should exercise caution at all times in the coming weeks.

I am a mother of boys. As in, only boys. Outnumbered in the gender stakes, I have no female allies in the house. (Even the cat is male.)

Mothers of only boys are a unique breed. So much so, there are even clubs you can join to meet other mothers without daughters.

Mothers with both sons and daughters can get a bit narky when you claim special standing for having only boys.

“But we deal with that, too,” they’ll say when you complain of stinky bedrooms and an inherent ability not to notice a household task that needs doing.

Yes, but you also have someone you can nudge when the male offspring are suffering from man-flu and share an eyeroll. Mothers of boys can only eyeroll inwardly.

We will never be the Mother of the Bride or the Maternal Grandmother both of whom seem to hold a higher standing in society than the paternal equivalents.

I am not one of those mothers who wishes she’d had a daughter so she could buy pretty dresses and play with Barbies. I was never that kind of girl myself, preferring to climb trees and play with Lego and I had a passionate objection to wearing dresses. I hate clothes shopping and the pink-themed aisles in toy stores give me the heebie jeebies.

But sometimes I can’t help wondering what my life would be like if I had another person in the house whose brain was wired similarly to mine. Maybe I’d feel a little less like an alien in my own home.

So you can imagine how keen I was to open up an article in the weekend magazine of one of our national newspapers to read about other mothers like me.

At the first line – “Neck deep in dirty footy tops, toy soldiers and cricket balls…” – I sighed. As I read on, I sighed some more. By the end, I was more than a little annoyed.

A household full of boys does not automatically equate to a household full of sporting equipment. I do not bond with my boys over football matches. We bond at superhero movies. I do not trip over basketballs in the house but over stacks of Japanese comic books. Our television is more likely to be tuned to the sci fi channel than the sports channel. I do not spend my time managing their sporting schedules but managing how much time they are spending in front of a screen. I don’t have to learn the rules of cricket scoring but I do have to learn how to use the parental controls on the wifi router.

It’s not that we didn’t give them the opportunity to pursue sports. Their father grew up in a sporting household and is a cricketer and tennis player. Cricket, tennis, football, basketball…we offered them all at various times to each of the boys. None of them stuck. It’s just not in their nature.

Boys don’t have to play sports.

Yes, they need activity, especially in the early years. So there were lots of trips to the park, the beach, the indoor play centre. And you have to watch them every second because they will take risks. But I’m more likely to be trying to get hair dye out of a costume shirt than grass stains out of cricket whites.

Frankenstein with his monster and Igor

I suspect I was destined to have boys. My husband is one of three boys. His father is one of two boys. His uncle had two children who were, you guessed it, boys. Let’s face it, I was never going to have a girl.

And that’s okay. Because I consider myself lucky that I scored three boys who love things I love – fantasy books, sci fi movies and cosplay – and I don’t have to trip over cricket balls in the backyard.

Boys are different – I’ll never understand the tolerance for a floor carpeted in dirty clothes and the lingering smell of rotten apples – and being a mother of boys is different to any other parenting experience.

I wouldn’t change it for all the sonic screwdrivers in the universe.

And yes, that title is a sniggering play on words. I live in a house full of boys, remember?

The kids are back at school, the husband is at work and the MOSY House of Testosterone is temporarily cleansed of its pervasive masculinity.

Well, except for the cat. But he’s neutered so doesn’t really count.

Testosterone actually has a physical, airborne presence. Did you know that?

That’s not science. That’s just me realising that I can actually breathe today. And hear the birds outside. And find room in my head for my own thoughts.

As has been previously well-established, I am not a girly girl but even my little oestrogen being can find it tough going against the storm cloud of ‘boyness’ that permeates my house.

Much like the smog you don’t notice when you live in the thick of it, a testosterone-filled house is just my daily reality that passes mostly without question. But the end of school holidays can be like a trip up the mountain to rediscover the fresh air and look back with amazement at the conditions I was living in for all those weeks.

Of course, it’s a fleeting escape. The testosterone horde will return this afternoon, their rampant maleness all the more dominant for the brief respite I will have enjoyed today.

In the meantime, I’ll take all the peace I can get.

A friend of mine recently gave birth to her first baby, a boy. I was inordinately excited not only because it was a long-awaited child but also, I soon realised, because she’d had a boy.

“Welcome to the MOB!!” I exclaimed excitedly in an email reply to her announcement.

Mothers Of Boys. We’re a unique…um…mob. I’m sure mothers of only girls have their unique challenges too but there’s something about being the one outnumbered in the household gender stakes that makes life more interesting. (Any fathers of girl-only households reading this are welcome to write their own blog post perspective.)

It’s quite possible that my friend, down the track, may become a Mother Of Boys And Not Boys but for the time being she is a part of the club. A club in which I am a more-than-paid-up member.

A Member of the MOB

After my first two boys were born and I was pregnant with my third child, I lost count of the number of people who asked “So, are you hoping for a girl?” It got a bit boring so I took to looking at the enquirer in horror and saying, “Oh, goodness, no! Why would I want one of those? I wouldn’t know what to do with one.” (I still don’t.)

Do I sometimes wonder what it would have been like to have a daughter? Of course. Do I ever wish one of my boys had been a girl? Never.

Besides, from listening to my girlfriends, bonding time with daughters seems to mainly involve clothes shopping. I’d rather be poked in the eye with a blunt stick (I believe it’s more painful than a sharp one). Give me a Joss Whedon movie outing with my boys any day.

In the hospital, after the birth of my third son, a cleaner told me that when my children were teenagers, I’d be glad I had boys. I held on to that promise through the years of small boys running amok in playgrounds, picking up any remotely pointed object to be used as a weapon, through the three-year-old penis obsessions and the pre-teen biffo and insults. And now, with two teenagers and one on the cusp, I can honestly say she was right. As I watch mothers of teenage girls struggle with the hormonal nastiness, psychological bullying and body image issues, the full-on early boyhood years seem worth it. Boys – my boys at least – are so much more straightforward. Well, as straightforward as parenting any teenager can be.

I can’t wait for the possibility of a cuddle with this newest member of the male race and to recall those thrice-heard words, 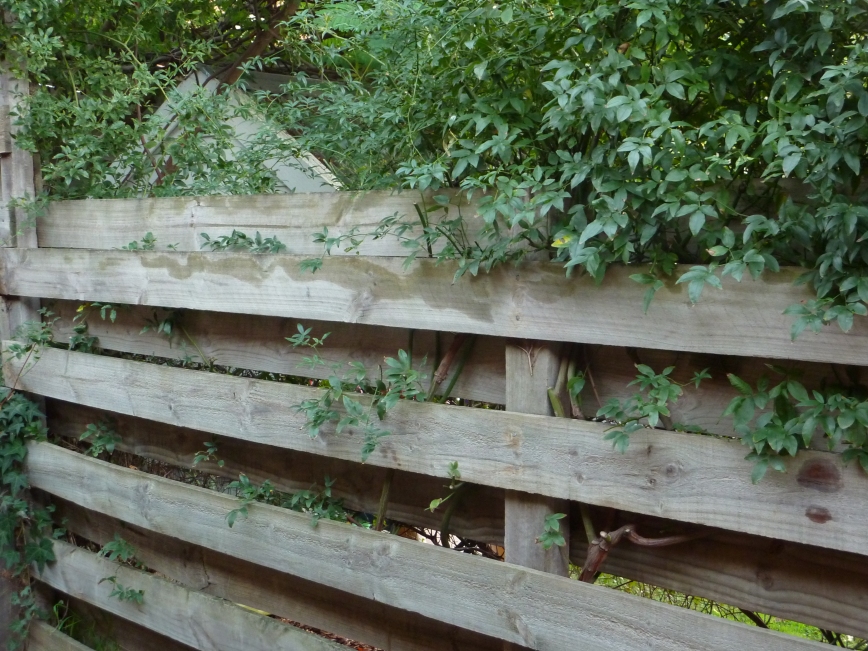 Dear mother of small boys next door. Yes, I hear them. All the time. No, don’t apologise.

It’s been a while since I was called Mummy. It’s just Mum now. I don’t get told to “Look at me!” any more. Sometimes, they ask me to look at something they’ve done. Maybe check over an English assignment or a maths problem. And my heart swells a little as I feel needed again.

It’s all deep rumblings and explosive laughter on my side of the fence now.

Bouncing on the trampoline, chattering in the sandpit, rattling around in the cubby house playing make-believe.

The trampoline is neglected. The sandpit is long gone. Cosplay at scifi conventions is as far as make-believe goes in my house these days.

Words you don’t understand because he’s still learning to talk.

Words I don’t understand because he talks about stuff far beyond my knowledge.

Well, I still get those. Less, but still. The arguments are louder. The tears more heartbreaking.

Dear mother of small boys next door. Yes, I hear them. All the time. No, don’t apologise.

Because once your life was mine.

And I still remember.

A response to the Daily Post Weekly Writing Challenge – Blog Your Block.