I’m not really much of a cat post kind of blogger but half my country is on fire and something lighthearted is needed.

Our cat Leonardo (more commonly referred to as Leo) appears to be undergoing a personality change. We think he may be developing dementia (he’s 12).

He’s never been a very chatty cat but lately he’s been positively loquacious. My favourite is when he wanders down the corridor in the wee hours of the morning miaowing in such a way that it sounds exactly like he’s saying, “Hello? Hello?” It’s hard not to call out “Hello!” in response.

While always enjoying sitting near people, he’s not really been a lap cat but the other night he went to sleep on the Husband’s lap and stayed there for half an hour.

When he asks for food, we put it in his bowl and then we have to stand there until he starts eating because if you walk away immediately he comes after you and asks to be fed. “I just did. It’s in your bowl,” we say. “What?” he says with his face. We sigh, walk back into the laundry and point to the food in the bowl. Once he starts eating it’s safe to leave. Although, a couple of times I’ve done that and he’s appeared back by my side again a few moments later asking for food. He has to be redirected back to the bowl where he goes “Oh, look at that. I have food!”

My latest project (and what prompted this post) is taking photos of the weird places he’s been going to sleep. It all started when I opened the blinds one early morning and saw him curled up asleep in the garden bed. It wasn’t even a warm morning. I was scared he was dead. He wasn’t. He just decided to sleep in the dirt and weeds (yeah, a Beautiful Gardens family we are not). And it went on from there. Enjoy Leo’s Sleeping Places.

Sleeping on the back of the couch is pretty normal

Is he still breathing??

At the back door

Because nothing is more comfy than concrete? 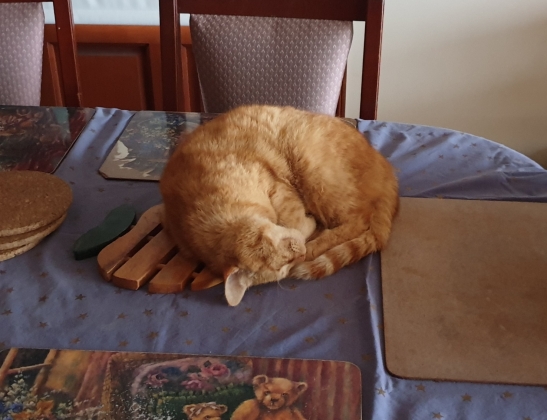 Sleeping on the table is his new favourite 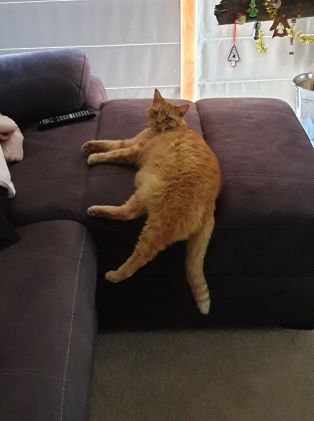 How is this comfortable??

You have to sing the title of this post to “Nights in White Satin” by the Moody Blues. Because I always do, that’s why.

47 thoughts on “Cats In Strange Places”