I ran another marathon.

Last year’s marathon was supposed to be the once-only, tick-it-off-the-bucket-list means of avoiding a significant birthday party.

And right up until I ran it, I was definitely only doing one. But then I crossed the finish line in a not-embarrassing time and then I got handed a big shiny medal. Ooh. Hard to resist a repeat of that experience. 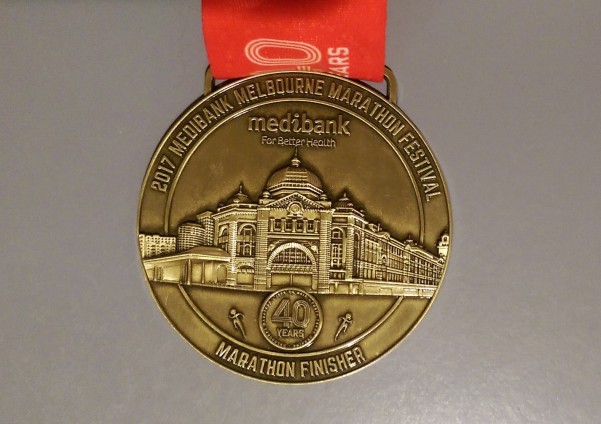 There’s more to it, though. Unbeknownst to me, I’d signed up to run the 40th Edition of the Melbourne Marathon. You realise what that means? The medal I was handed at that finish line was a medal only those who completed that particular marathon will ever possess because it has “40 Years” on it.

All together now: Ooooh.

So when Facebook, in its infinite wisdom, decided to float into my news stream the news that the Gold Coast Marathon was celebrating 40 Years in 2018, what was a now-marathon-runner supposed to do?

I sold it to them on the basis that we’d get a family holiday out of it at a warm Northern place in the cold Southern winter.

And I spent the following training months vowing I’d never do another one. I mean, who really has time for all that training?

That training was less than optimal. I pretty much dropped the ball between February and April. I kept finding excuses not to go to the gym to do my strength training or to cut short a difficult interval training run or to swap a run for a gym session because it was cold and dark outside and I didn’t wanna. I “didn’t wanna” quite a bit too much.

Because of this or maybe not because of this, maybe because I’m older or maybe just because life can be like that, I was also battling a bit of knee and hip annoyance in the weeks leading up the marathon. Well, that’s not good.

The upshot of this approach is that I rather enjoyed the marathon. I didn’t push hard, I took the time to have a proper drink at every station (although, over hydrating at the start meant a 3 minute layover at the 5km mark when I decided a use of facilities might be a good idea before my bladder burst) and I just tried to enjoy the experience and the scenery. 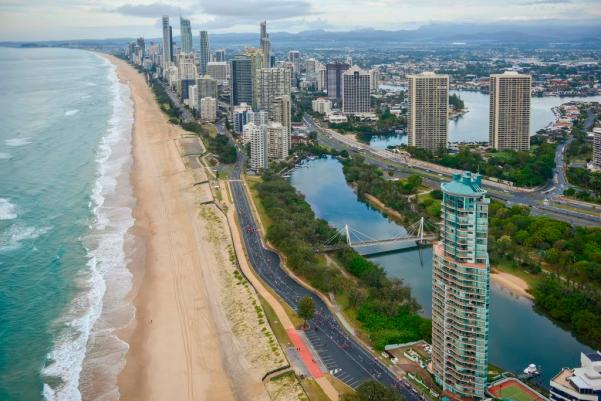 Okay, I didn’t enjoy all of it. I mean, it’s a marathon. Nobody enjoys all of it. There was a 6km section from about the 31km mark when we’d just passed the entrance into the park where the finish line is and we had to keep going before we could loop back for the final leg that seemed interminable. I’ve never known 6km to be so loooooong. 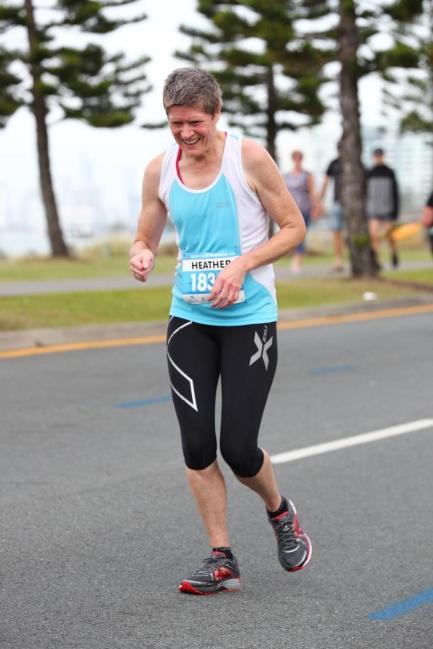 Yeah, not enjoying this bit

It was also a bit warm for my liking. I’ve mentioned before that I prefer to run in the cold. It wasn’t Commonwealth-Games-collapse-on-the-side-of-the-road level heat but it was too warm for this woman from the Victorian wintry lands.

In the end, I ran a similar time to last year, just a few minutes over my previous time. To have enjoyed the race and finished well (and no trouble with the cramping I had last time) was worth a few extra minutes. 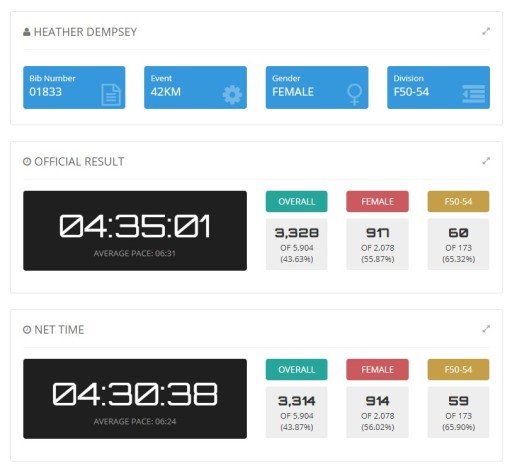 The organisers of the Gold Coast Marathon claim 60% of participants achieve a personal best time in this event. That makes the sneaky voices whisper “if only”s in your ear when you don’t achieve one. But here’s the thing about that statistic. I’ve just filled out a survey about the event and one of the questions was “Did you make a personal best time?” for which you can answer “Yes” or “No”. Here’s what I also know: according to the announcer at the finish line, 30% of participants were running their first marathon. If it’s your first marathon, it’s a given that you’re going to answer “Yes” to that question. Right? Plus, if you ran a shocker and didn’t beat a previous time, perhaps you’d be disinclined to fill out a survey and answer such a question. So it puts that 60% figure in a dodgy light, I reckon.

In the end, all that mattered was crossing that finish line and collecting another big shiny medal. It’s always about the bling for me. 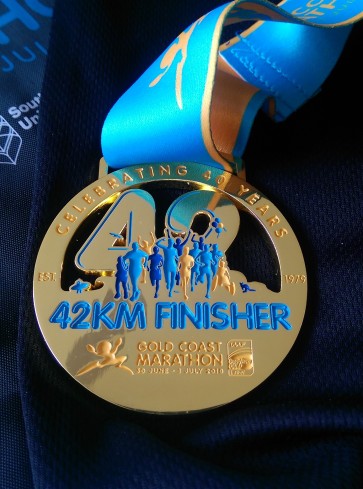 All that glitters is on the Gold Coast. 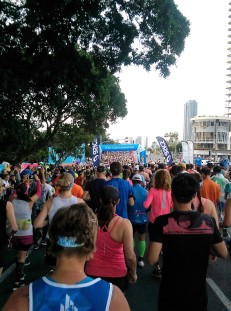 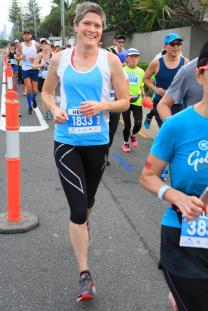 Happier times in the first half 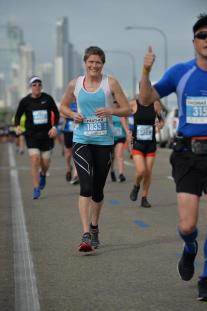 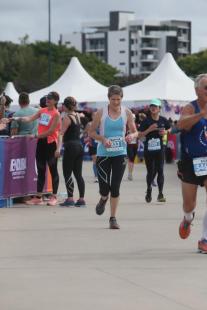 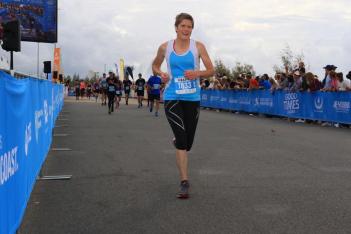 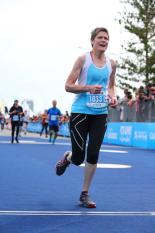 Oh, thank God I made it 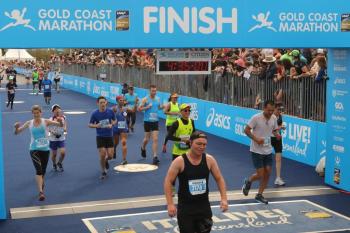 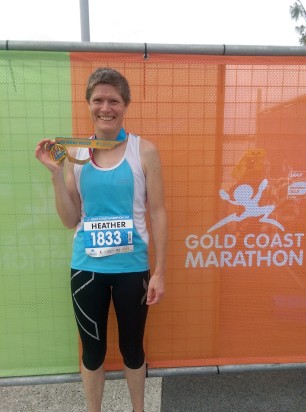 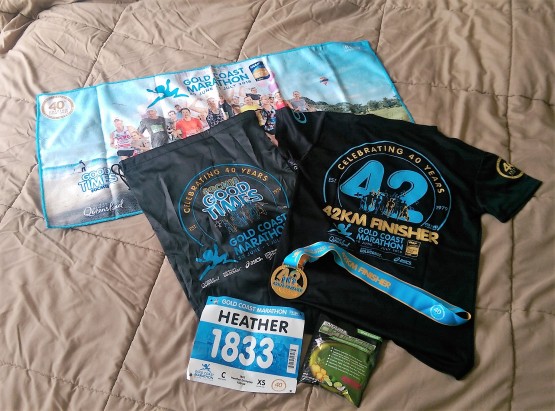 Postscript: A friend texted today to ask how the marathon went. I told her it went well and I enjoyed it. Then I said:

“Unfortunately, that probably means I’ll do another one. LOL”

40 thoughts on “All That Glitters”

Leave a Reply to Master of Something Yet Cancel reply