I used to sail. In a boat. On the water. Really.

(You would know this if you’ve read the extensive list of what I’ve attempted to be good at on my About page.)

Hidden in a shed at my parents’ house there is a boat. My boat. The “Eleanor Rigby”. (I was a big Beatles fan from about the age of nine.)

She hasn’t been sailed in…. oh…. I don’t want to think about how long. Decades.

It’s time to let her go.

I haven’t sailed her since my teens but I’m finding it unexpectedly heart-wrenching to part with her.

I developed a passion for sailing after reading Swallows and Amazons by Arthur Ransome when I was twelve. I think part of the reason why sailing, in the end, didn’t stick was because it was never (and was never going to be) like it was in the book. I wanted to sail with hearty mates. I wanted to sail on a lake to a private island. I wanted secret adventures and seed cake and tea cooked over a fire. I wanted to be friends with John and Susan and Titty and Roger. I most especially wanted to be best friends with Nancy and Peggy, the Amazon Pirates.

But it was fantasy and this was reality.

So I sailed in a not-a-clinker dinghy on a bay (well, technically a lagoon off the bay) by myself and there were no private islands on which to camp and make parley with the natives.

It was never quite the same as the dream I held.

But I think it’s mostly hard to let her go because she reminds me of my father.

A father who understood the weird dreams and desires of his youngest daughter and bought her a boat even though money must have been tight.

A father who drove his daughter every week to the lagoon and waited on the bank while she tried to fulfil that dream.

A father who travelled hours around the bay towing the boat so his daughter could share her sailing passion with her school friends at camp.

A father who continued to pay the registration on the boat trailer for years after his flighty daughter had moved on to other things just in case she wanted to come back to sailing.

Life changes. Dad is gone. Mum needs to move on. And the boat must go.

Anyway, she needs to feel the wind in her sail again. Feel the water lapping at her sides. It’s only fair.

But I’ll miss her. 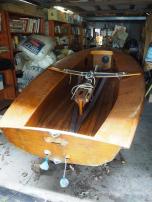 54 thoughts on “Sailing Away From Sailing”