The one thing that most people will tell you they know about Bhutan is that it is the country of Gross National Happiness.

In 1972, Bhutan’s Fourth King, Jigme Singye Wangchuck, declared that the country would no longer measure its success by the standard Gross National Product but by a measure of Gross National Happiness. There are four pillars to the GNH –  Good Governance, Sustainable Socio-economic Development, Preservation and Promotion of Culture, and Environmental Conservation.

For more information and the latest report on the GNH Index, visit The Centre for Bhutan Studies & GNH Research website here.

Bhutan has two kings. In 2006, the Fourth King decided his son was old enough to become king so he abdicated the throne and Jigme Khesar Namgyel Wangchuck became the Fifth King of Bhutan. (I can think of another royal family that could take a lesson from that.) The Fourth King still retains some power (I guess the Fifth King became a King-in-Training) and is still greatly loved as evidenced by the year-long celebrations of his 60th birthday in 2015. The Fifth King appears equally revered so I guess he isn’t looking over his shoulder either. 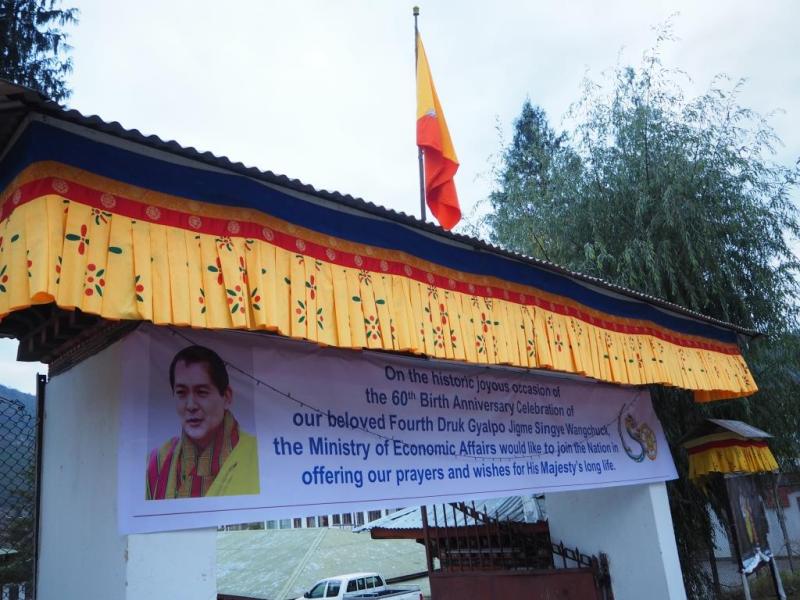 Poverty is still evident but for that part of the world, there is very little of it in Bhutan.

Bhutan is tiny. Approximately 755,000 people live in a country 38,394 km² in area. The capital, Thimphu, has a population of 50,000. I live in what is classed a “regional city” in my country and even we have five times that number of people. 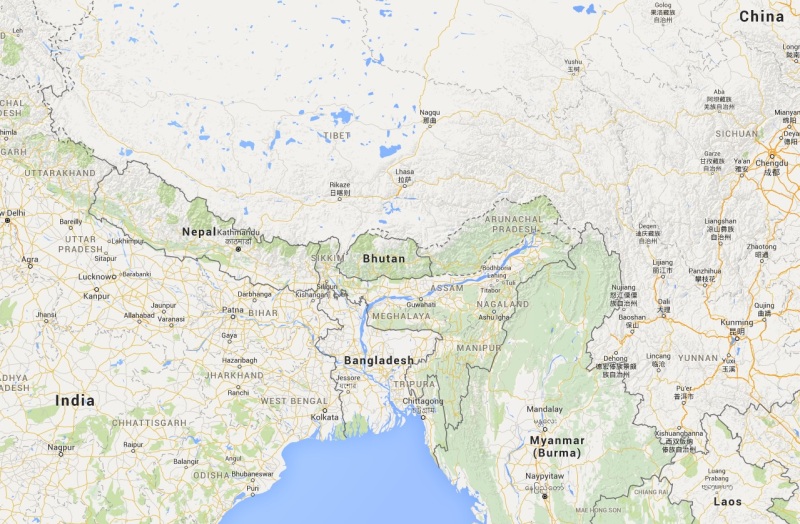 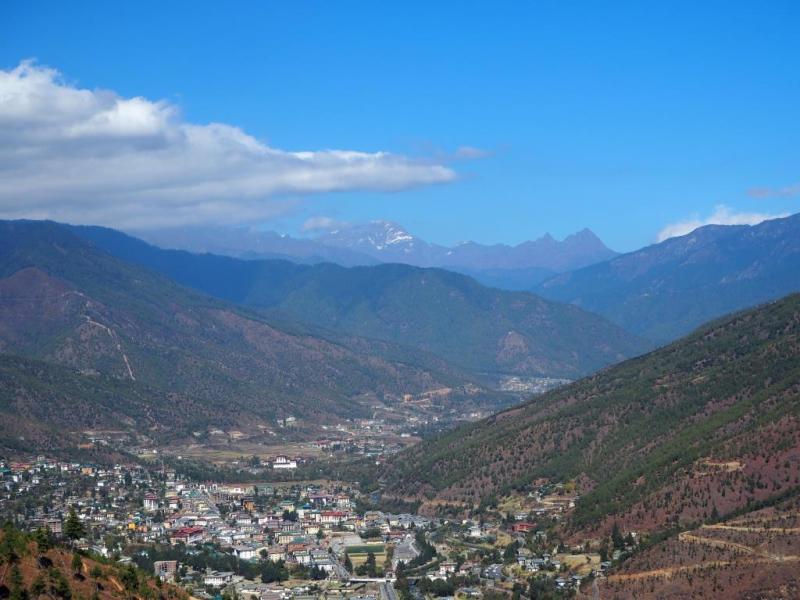 Being able to cross the road easily makes me happy.

Bhutan has a thriving handicrafts industry which is actively supported and protected from cheap imports by the government. Textiles, pottery and handmade paper are popular choices.

Painting at the Art & Craft School in Thimphu

Embroidery at the Art & Craft School in Thimphu

Sculpture at the Art & Craft School in Thimphu 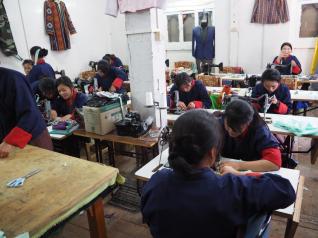 Textiles at the Art & Craft School in Thimphu

Carving at the Art & Craft School in Thimphu 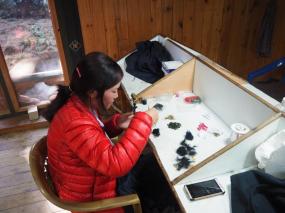 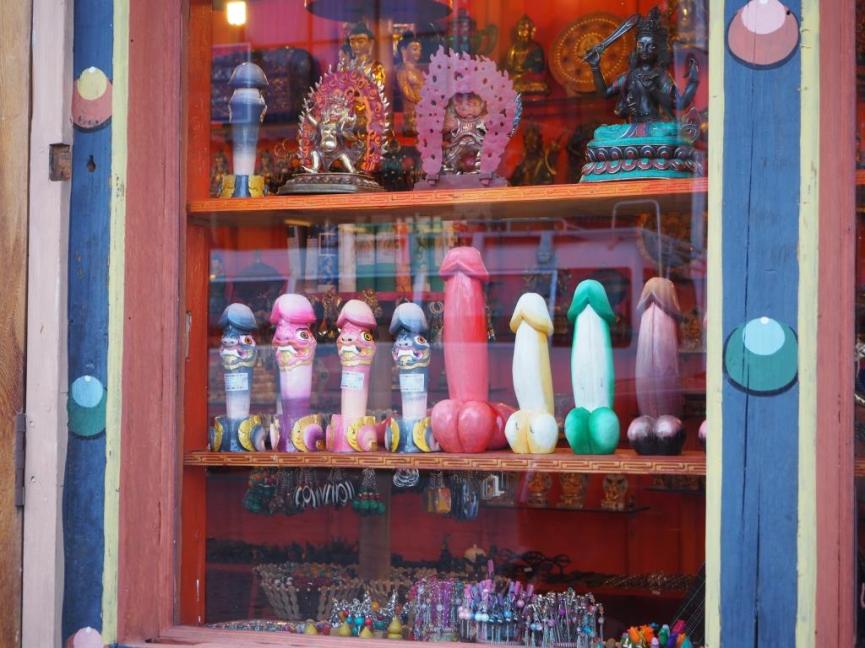 Not so sure about these particular handicrafts

Home-based workers (predominantly women) are encouraged to start businesses promoting traditional handicrafts. One craft market in Thimphu will have you wondering just how much room and weight you have available in your suitcase. (Can I possibly get that magnificent teapot home?)

Preservation and Promotion of Culture

The first step Bhutan takes to preserve its culture is to make it difficult to visit. With the exception of Indian nationals, foreigners are not permitted to wander about the country willy-nilly. To be granted a visa for Bhutan, you must book through an approved travel company and your trip must meet a minimum daily cost. (A portion of this is allocated to health and education programs.) Therefore all accommodation and meals are pre-booked and your itinerary will be included in your visa as an approved route. 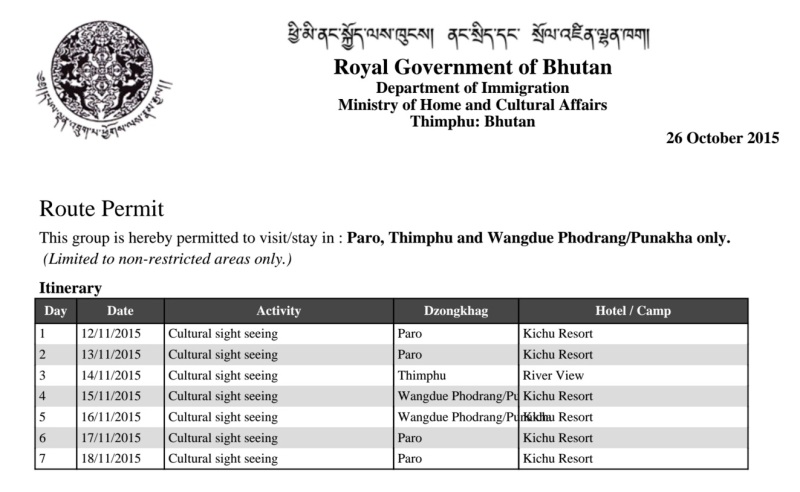 In case you thought I was joking

You will also be allocated a guide and a driver who will accompany you for the entire stay. (Although, once I did manage to escape them in Paro to have a coffee in solitary peace.) 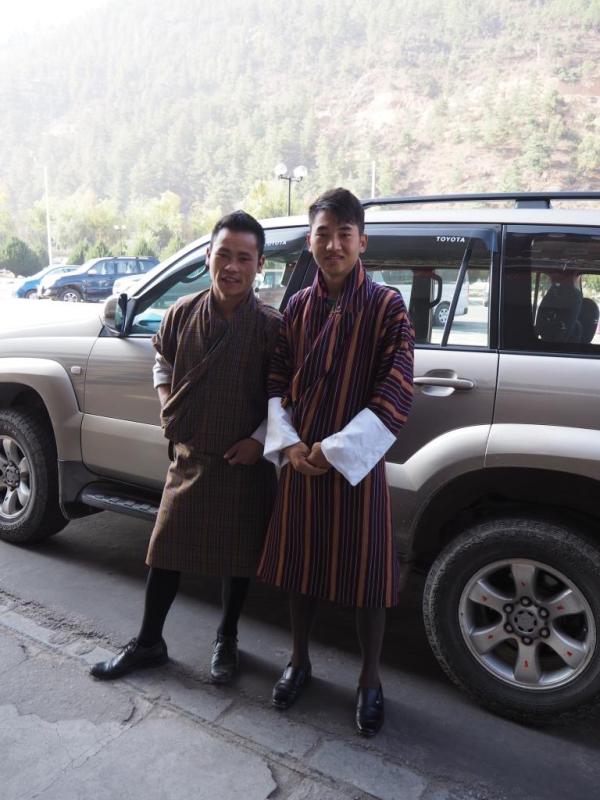 Once you experience some of the roads, you’ll be glad of the driver. Trust me.

One of the better sections

The advantage of this approach is that Bhutan is not a very busy place to visit. You can also sit back and relax because everything is taken care of for you.

The disadvantage is that there is no flexibility to stop longer somewhere or change your route. It can also be difficult for those of us of a shy, introverted nature to be in the constant company of a guide (even while trying to shop).

You also have a tendency to bump into the same people at various points as most visitors are taken to similar places. This can be either an advantage or disadvantage depending on the people you keep bumping into. 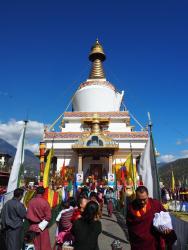 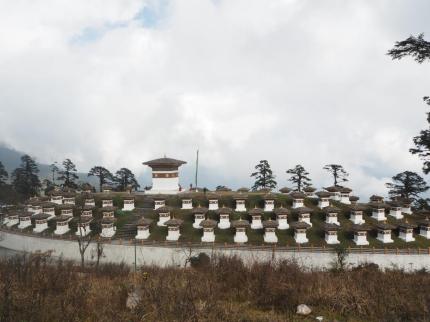 But it works. From the moment you land in Bhutan, there is no question as to the nature of its culture. Almost everyone wears national dress (it is expected for work and school) and the buildings have a distinctive style.

Wangdue Phodrang Dzong, destroyed by fire in 2012, now being rebuilt mostly by volunteers 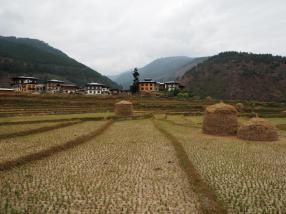 Even the haystacks seem to be culturally appropriate 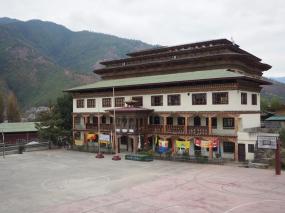 Boys on their way to school, Thimphu 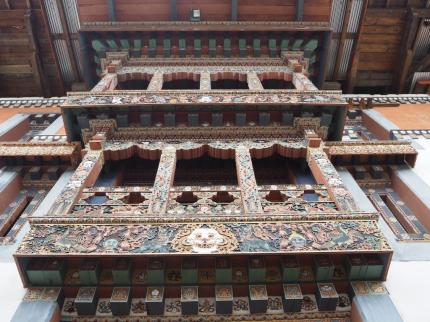 Bhutan got on board the environment movement before there was one. Clean water and energy were seen as important parts of promoting happiness but it was also recognised that a beautiful landscape could in itself provide well-being. The country is more than 70% covered in trees and there are reminders everywhere to care for the environment. 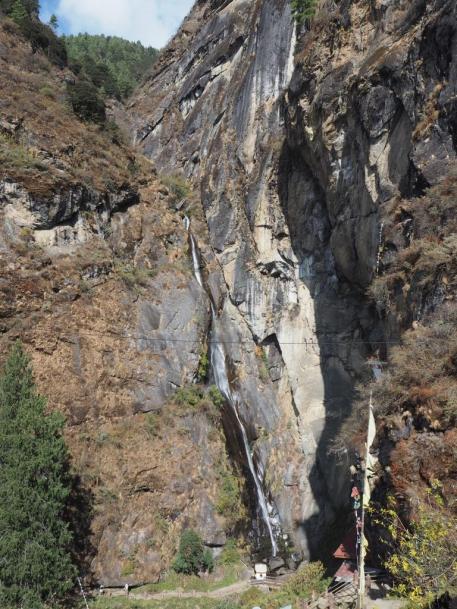 Outside my hotel room in Wangdi 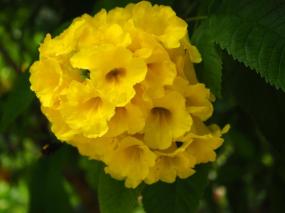 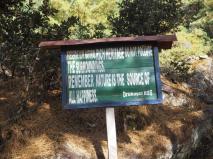 Spending time in a stunning natural environment makes me happy.

Should I visit Bhutan?

Are you kidding? Sorry, yes, yes, go to Bhutan. You won’t regret it. And although it may seem an expensive place to put on the itinerary, the flight into Paro will more than justify the expense before you even get there. 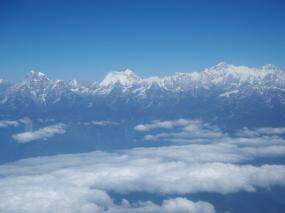 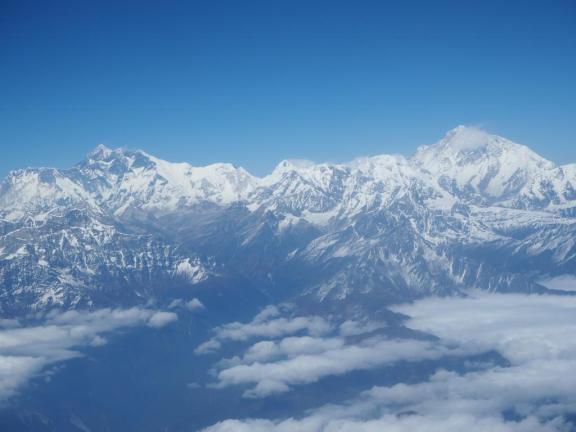 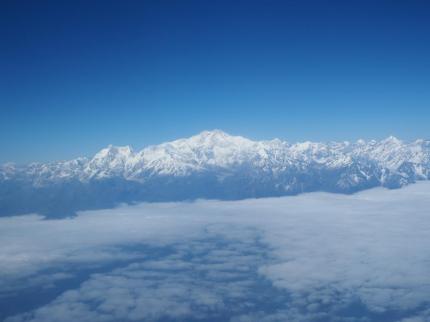 MOSY travelled to Bhutan with World Expeditions (Essence of Bhutan trip) courtesy of her own bank account. She has no reason to lie.

59 thoughts on “Finding Happiness In Bhutan”