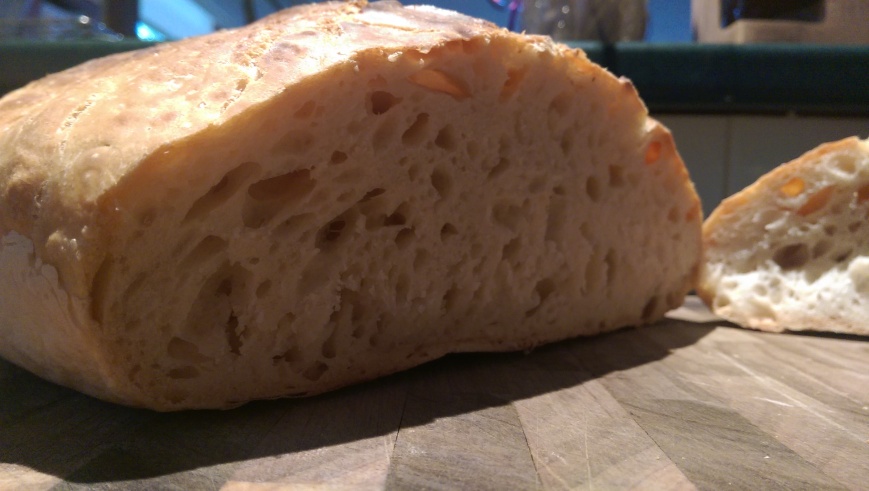 Yes, okay, so it was the great bread-making adventure of Thursday morning…

I was sent the “Perfect Bread” recipe some time ago by my friend M-R, but I had thus far failed to undertake the task because:

a. It required a 2.5 litre lidded casserole dish that I do not possess.

b. It required an ability to plan in advance that I do not possess.

This, of course, was viewed very dimly by the great Margaret-Rose and through the usual haranguing and audible (all the way from Sydney) frustrated sighing, I found myself on Wednesday afternoon with a bowl and the necessary ingredients, inexplicably mixing up the first ever batch. In double quantity because the only receptacle I had was significantly larger than the required measurement.

And thus began the process of “baking by email” as I sent off panicked emails. 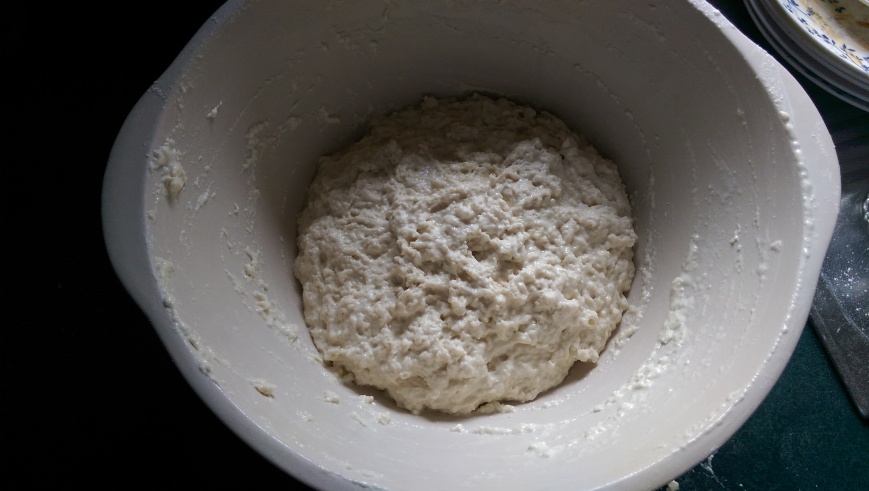 Does this look lumpy to you?

Apparently not. But then, just as I was launching into my first nervous breakdown, I received the news that M-R was undertaking the bread-making herself to try and understand what on earth I was talking about. It turned out that these were not ‘lumps’. I’m still mystified as to what they were but I was assured all was well. Just put the lid on and leave it. Yes, ma’am.

Put the lid on and walk away for 12 hours. Like I said, Advanced Planning required.

And it did look better in the morning.

But then, in the process of baking, confusion ensued.

“Is it 250 degrees Celsius?” This was not stipulated in the instructions but my question was treated with scorn. Of course it was Celsius – that’s what we use, right?

“Would it be quicker to put the pot in the oven as it’s heating up, do you think?” As opposed to putting it in the heated oven for 25 minutes. I was instructed to get that pot in the oven toot sweet. (I already had, on a hunch.) Of course it should be put in there while the oven heated up. Why would I ask such a question?

It was not my fault. There was a wayward comma in the instructions. 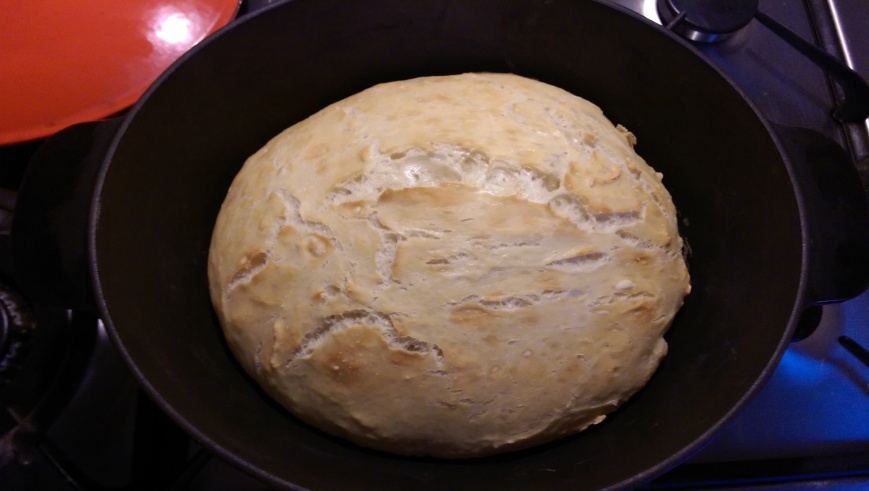 Now, it is worth pointing out that while all this was going on, I was still required to complete the usual tasks related to getting three children to school.

Yeah, I don’t know why I chose to undertake this on a school night/morning either.

Plus, it was the Eldest Son’s last day at school so let’s throw in a costume requirement and a need to be at school early for breakfast, shall we? Well, because I am basically insane.

Then the phone rang. As a casual relief teacher this is a sound that strikes both joy and annoyance in the heart. I was required at work.

So my poor freshly baked loaf spent the day cooling its heels on the kitchen bench, all alone, while the rest of us were busy with, you know, life and stuff. 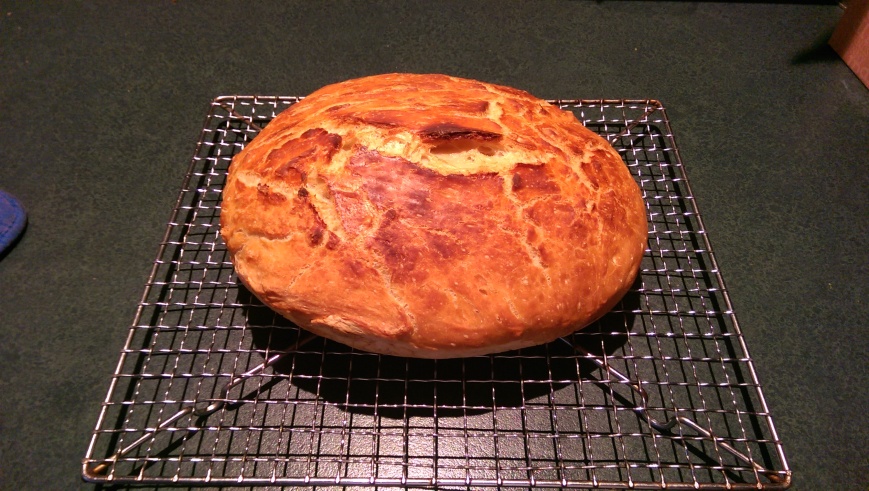 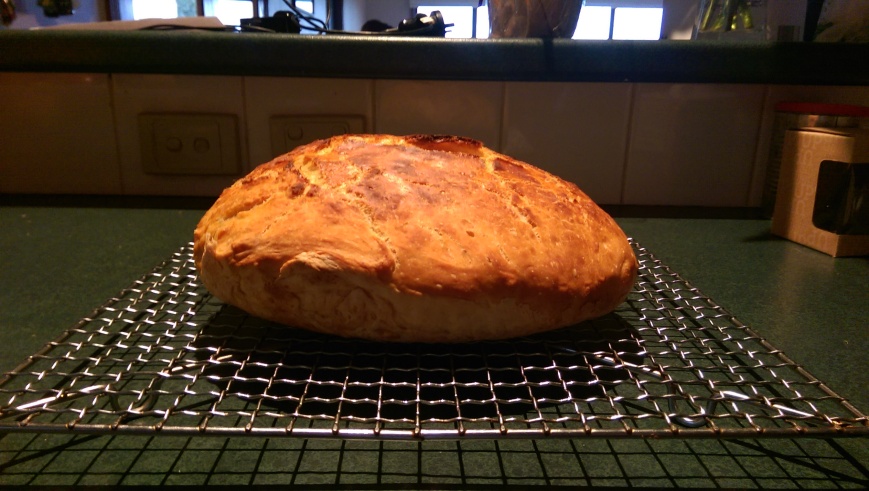 Darling, that is not your best angle…

It survived. And forgave us by still being a delicious accompaniment to a hurriedly prepared dish of pumpkin soup. Hurriedly because [points to self] parent of children with after-school activities.

The lumps disappeared and left behind all these holes.

Let me assure you that this will not last long in this house.

Through it all, there was dear M-R on the end of a virtual line, giving me tips, reassuring my nerves and dispelling my doubts. And carrying on her own baking extravaganza in her own tiny kitchen at the same time. Go check out her post about the adventure. It’s undoubtedly funnier and tastier than mine!

And one last thing. Because I am really probably completely insane, I figured since I was undertaking this delayed-gratification baking exercise with the bread, I might as well try out my friend Barbara Pyett’s ginger nuts recipe while I was at it.

Which just meant another bowl of something I couldn’t do anything with in the morning. They had to wait until after dinner. They also survived. 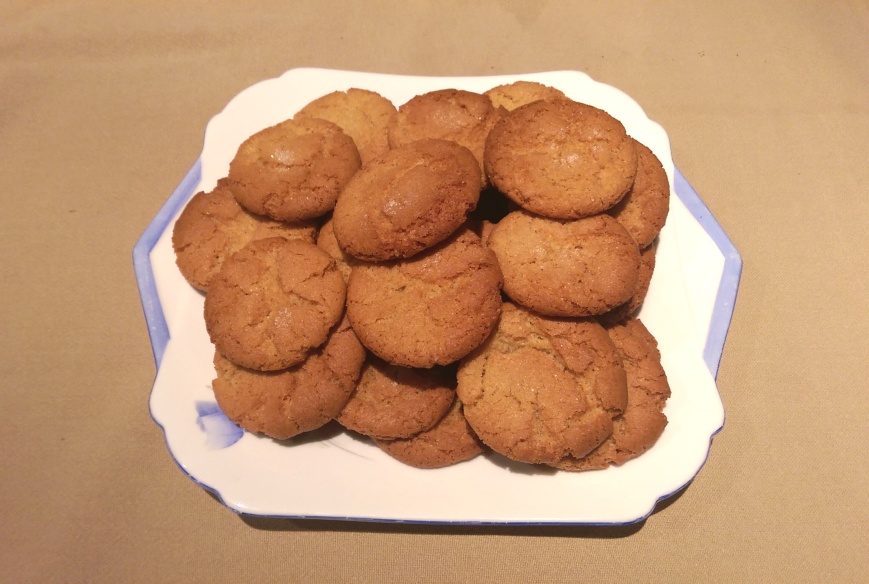 And I survived. Perhaps not with my sanity intact but then I’m not sure it wasn’t a bit shredded to begin with.

35 thoughts on “The Great Bread-Making Adventure”