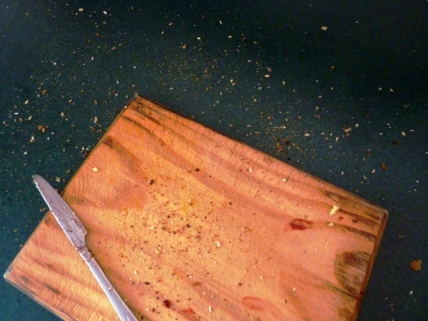 Scene of the latest outbreak of hostilities.

In what can only be described as an outbreak of domestic tension in the Central Republic of Kitchen, the leader of the country has declared Dishcloth Law.

Mother, until now generally viewed as a benevolent dictator by the international community, has stated that unless all citizens implement the Clean Up After Yourself legislation being forced through parliament tomorrow, food supplies will be restricted and all citizens will be required to report daily for compulsory dishes duty.

A small rebel contingent in the country has for some time been waging a guerrilla war of toast crumbs in the bench fringes of the country.

Yesterday, Mother sacked the Deputy Leader, Father, as Secretary of Cleanliness. An anonymous source close to the leader said the Deputy Leader was found to be in line with the rebels. “He’s just as bad,” Mother is reported to have said.

The United Household Nations is monitoring the situation. At present, they advise there is no cause for alarm and it is hoped that the rebellion will be quelled peacefully and the country returned to its normal state of General Untidiness within the month.

40 thoughts on “The Crumb Wars: Battle of the Bench”