Kind hearts are the gardens, Kind thoughts are the roots,
Kind words are the flowers, Kind deeds are the fruits,
Take care of your garden, And keep out the weeds,
Fill it with sunshine, Kind words and kind deeds.
– Henry Wadsworth Longfellow

In the early 1990s I made a 7-week trip across the USA from New York to Los Angeles by Greyhound bus (seriously). I was alone, in my early 20s and I don’t know what I was thinking.

The trip was the tail end of a traditional young Australian rite of passage to travel to the other side of the globe for a year or so. Having already spent nine months in Europe, I was on my way home via the States.

I was ready to go home, I was heading in the right direction and it could have been the miserable journey of a long drawn out homecoming.

Ah, but for the kind hearts I met along the way…

Some were pre-prepared. A year living in Kentucky before I was old enough to hold memories and subsequent study by my father for his PhD at the University of Cincinnati (not to mention the conference contacts to which this lofty attainment would lead), gave me ready-made homes away from home across the country, strangers as they were to me.

I arrived, terrified and drowning in the horror stories, at JFK Airport in New York at 9.30pm in the middle of December. Adamant that I would put my safety first and stay in the nearest airport hotel until morning, the purse strings didn’t agree and I found myself inexplicably on a bus on my way to Port Authority Bus Terminal. Next plan – find the closest hotel to the bus station I could afford. Mad scrambling through the guidebook (this being prior to the days of Tripadvisor and its ilk). Alighting the bus, I made a beeline for the hotel, late at night, in the dark and politely ignoring the gentleman who offered to carry my bag.

The next morning, I picked up a payphone and called my first angel of mercy, living in New Jersey. In the daylight, I was brave enough to cover enough of the essentials to be able to say “I’ve been to New York” and then I hotfooted it out of that den of iniquity to the relative safety of the NJ ‘burbs.

They picked me up, took me home, fed me, gave me a bed, introduced me to their friends and kept me safe. 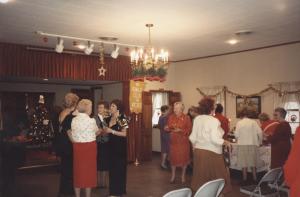 The first kind fruits of my garden.

But there were more to be harvested.

Christmas in Cleveland, Ohio – unexpected gifts and dinners as one of the family.

New Year in Lexington, Kentucky – a connection to my babyhood and the patient tour of the places of my history but not my memories. 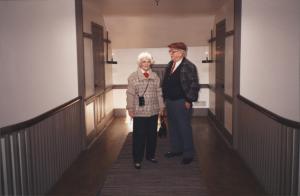 A stop in Gainsville, Florida – after a lengthy ride from Philly and the one face I actually remembered when collected at the bus station. And another in Tuscaloosa, Alabama – an extended family welcome and unexpected snow. 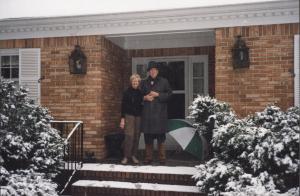 The contacts my parents had so assiduously maintained over the years brought kindness and love into a tired, travelling, homesick life.

And my garden of kindness grew.

You cannot do a kindness too soon, for you never know how soon it will be too late.
– Ralph Waldo Emerson

Some angels I had collected in my travels, like souvenirs, but souvenirs that were useful and didn’t gather dust.

A place to rest in Philadelphia after a 30 hour bus ride from Kentucky. I was a total stranger but their friends – the London family for whom I had worked as an au pair – had spoken highly of this strange, young Australian and they welcomed me into their home and family.

A mid-country stop in Houston, Texas – the result of a chance encounter on a bus en route to the Taizé Community in France. At the time, they moved on quickly to their next destination while I stayed on for a fortnight but at their urging, we re-acquainted at their home, thousands of kilometres from where we first met.  As I was moving ever closer to the flight to take me home, their substitute parental love and care was both soothing and heartbreaking as I longed for my own family.

Shall we make a new rule of life from tonight: always to try to be a little kinder than is necessary?
– J. M. Barrie, The Little White Bird

And some – perhaps the best? – were random.

The woman who struck up a conversation on Boston Common and invited me home for lunch.

The actor on his way to Hollywood who kept me company on the long bus ride from San Antonio to Los Angeles.

The mother of the girlfriend of the grandson of the couple who took me in at Tuscaloosa, Alabama (did you get that?!) who gave me a place to live and a bicycle to travel by at UCLA in Los Angeles and saved me from my mortal fear of living in a big city that still lingered from the starting point of this American journey. And she took me to Disneyland.

These were the kind hearts who were the gardens of my USA travels. Some known to me, some not. Some are still known but many have been lost in the passageways of time, a result of the communication slackness of young adulthood. Some have left us, now true angels no longer earthbound.

All of them the roots, the flowers and the fruits of my garden of kindness.

Give us days to be filled with small rebellions – senseless, brutal acts of kindness from us all.
– Jars of Clay, Small Rebellions

A response to the Daily Post Weekly Writing Challenge – Honey versus Vinegar which made me think of all the acts of kindness I’ve experienced on my travels. These are just some of them.