Their is always going to be somebody who will hapily point out your going about things the rong way, weather you like it or not.

Ha! Made you wince!

Don’t worry, I know I used the wrong words up there. As a perfectionist, I just wanted to see if I could even go through with it.

I recently read a wonderful post by author Josephine Moon in which she writes about being a recovering perfectionist. At this stage, as a ‘suffering’ perfectionist, I can only aspire to the status of ‘recovering’.

Perfectionists are their own worst enemies

In the first case I had to sing a song as ‘cantor’ – I sing the verses, everyone joins in on the chorus. I thought it went okay (see, perfectionist). I received many, many compliments afterwards. And one remark that inferred I had sung the song incorrectly. So guess which comment stuck in my head for the rest of the day? It didn’t seem to matter that the majority of people had thought it beautiful. It only takes one negative reaction to send a perfectionist on a downward spiral of self-criticism. “What did I do wrong?” “How was it wrong?” “I should have…” “If only I’d…” Like the princess who could feel the pea through a pile of mattresses, perfectionists feel the pain of ‘not getting it right’ through all the praise and congratulations.

In the second case, nobody said anything negative except my own inner perfectionist. I’ve recently moved into emergency teaching in the disability sector. I have neither qualifications nor experience in special education but I know they are desperate for relief teachers and I am keen to learn and make a difference. I was called in to work yesterday and it did not go well. Things became so out of control, an additional aide was sent into the room and even the principal came and took one child away for a while to try and calm the situation. I felt useless. On reflection I realised that it was actually my own perfectionism that had caused the problem.

Working with children with disabilities takes special skills and processes. Things must be done a certain way, particular words must be used when speaking, defined actions must be used when directing the children to do things and activities must be tailored specifically for that class. It can be overwhelming and in wanting to get it right, I froze and instead did nothing.

I received no criticism from anyone involved at the school, but that was not necessary. My own perfectionist was quite capable of berating me herself. “I was terrible today.” “They’ll never ask me back.” “I should have done…” “Why didn’t I…”

Being a perfectionist can make you feel like a tiny boat in a storm of criticism both external and internal. It’s all you can do to keep afloat and try and head for a safe harbour. 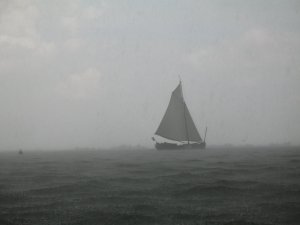 1. Turn up the positive and lower the negative. Hear the praise and quiet the criticism. It’s okay to hear and learn from constructive comments that will allow you to do things better but don’t let it drown out all the things you got right.

2. Sometimes things will not go well. Sometimes you will get it wrong. Learn from it and move on. Change the situation then let it go. Don’t let the fear of getting it wrong hold you back from getting it right.

It’s a long journey and a far from easy one but as long as I keep moving forward I believe I’ll get there.

24 thoughts on “Whethering The Storm”