“Mum, it says it’s BYO alcohol. If you’re under 18, you just need a permission note from your parents.” My 17-year-old son was giving me the details to the latest 18th birthday party. I stared at him. “Well, I’m sorry but I’m not giving you permission.” He gave me a look of disappointment mixed with resignation. I could almost hear the voice in his head, “Great. I’ll probably be the only one”.

One of the toughest things I’ve found in parenting is finding the balance between maintaining my principles in regard to my parenting choices and helping my children navigate the tricky social world of school.

Parents get peer pressure too.

Pressure to buy the right toys, to see the right movies, to watch the right tv shows. It would be easy for us to limit them in any way we wanted, but it’s our children who have to bear the brunt of every decision we make in how they are then treated by their peers. It’s a delicate balancing act between giving in just enough to make life a little easier for them and holding fast to firm beliefs in what is right for them. 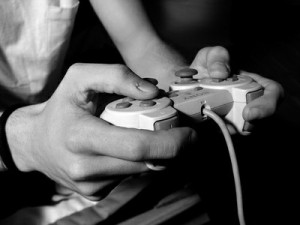 We refused to buy our boys one of those games consoles until our eldest was about 14. When we did relent (partly through a lack of ideas of what else we could give three boys for Christmas – there’s only so much Lego you can buy), we bought the one we thought we could live with. It wasn’t the coolest one or the most popular and we know lots of their friends have the other brands, but that was as far as we were prepared to go in compromising on our parenting principles.

Kids aren’t the only ones to cop it from their peers, either. We’ve certainly had comments from other parents saying that we’re being too tough or asking just how bad would it be if we let them have/see/do whatever.

I can live with the pressure from other parents. It’s watching my children fight to fit in when they can’t just follow the crowd that makes it tough.

After the look from my 17-year-old, I back-pedalled a little and said, “I’ll think about it”. I did and came to the same conclusion. I had asked myself, “What do I want to teach him here?” and realised I sure didn’t want to teach him you should go against what you strongly believe to be right just to fit in. This is exactly what we shouldn’t be teaching our teenagers. ‘Just Say No’ has to be a mantra for parents as much as the kids.

But sometimes it’s about compromise. I bought him some fancy schmancy non-alcoholic ginger beer that came in the same sort of bottles as alcoholic alternatives so he could have a ‘drink’ in his hand without us having to give in to peer pressure.

He had a great time.

8 thoughts on “Parents Get Peer Pressure Too”